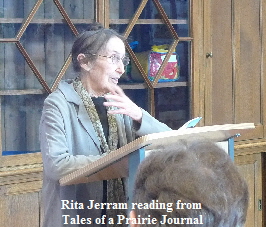 Some years ago, Rita Jerram read her grandmother Edith’s journals and began to imagine herself following in Edith’s footsteps. Rita is herself now a mother and grandmother, and no stranger to an adventurous lifestyle, having lived in Fiji and Australia.

Rita was born in Derbyshire where her family was subject to the vicissitudes of prewar life: the army moved a gunnery range next to her village, the Germans shelling Derby industries, so Rita’s family moved in over the ‘shop’, a Buxton furniture business. After the war the family farm was flooded for a reservoir. at this point Rita was diagnosed with TB,shortly after having anorexia, then diagnosed as ‘have a sandwich’ disease: not surprising really after so much disruption.

After recuperating Rita worked for her father then started nursing, however she was not well enough to complete the training. Wanderlust seems to have set in as she moved to Paris to be a children’s nanny, loving it, before returning to England and later making a new start in Sydney, Australia. On her return, to allay her father’s fears, she met her husband, another restless soul, and traveled en famille to Australia, Fiji, Australia again, Brisbane this time, and then Aukland, New Zealand, before returning to the UK. In this time she had 3 children and survived a partularly bad hurricane (in Fiji) where the only water was collected in a neighbour’s boat, ironically, only brought inland for safety. 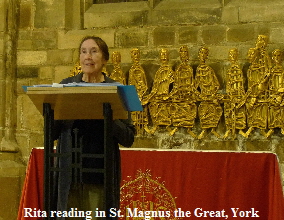 From thence, Bognor Regis, Harrogate and Scarborough after which Rita divorced and moved to York where she joined a local writers group and with their encouragement and support began to prepare and edit Edith’s journals for publication. During this process, every year, she would read an edited extract at a York 50+ Festival open mike, usually in a cold and draughty church toward the and of autumn slowly building a coterie of admirers who often came only to hear Rita’s next extract. This following encouraged Rita, and publishers Stairwell Books and Fighting Cock Press to get together to publish Edith’s Journals.

In the mean time Rita, a keen letter writer, set off again to mine her own journals and to write about her experiences as a teenager in a sanatorium isolating her as a tuberculosis patient from the general population. She has a talent for capturing the highs and lows of peoples experience and express it with pathos and humour. 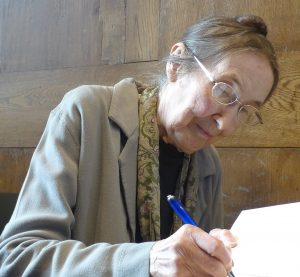 Rita is approaching her eighties and is still writing.